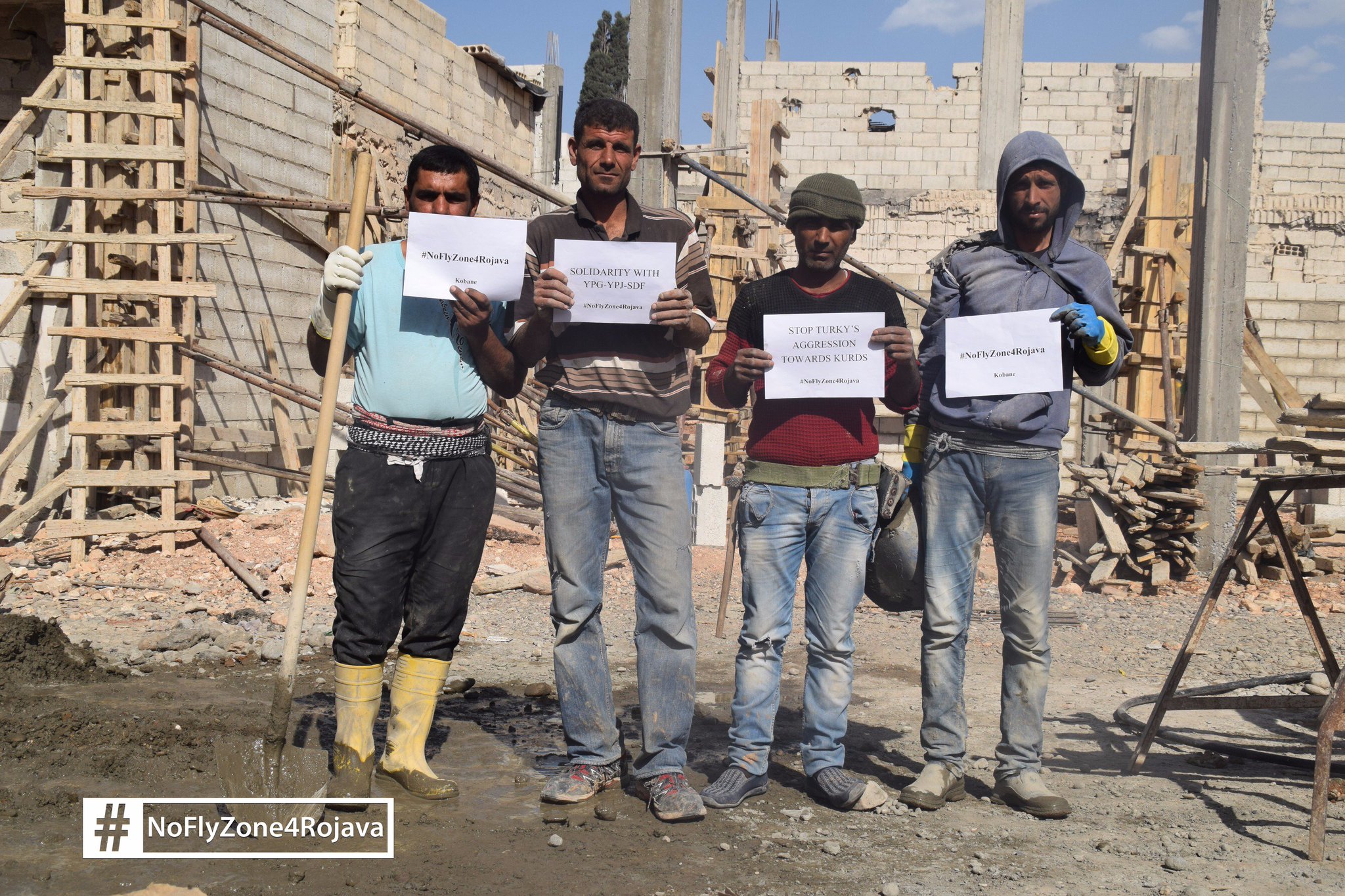 When the Syrian people rose against the regime, the most basic demands were highly legitimate demands, such as freedom and respect for human rights. However, with the intervention of the regional and international powers to the Syrian revolution, these demands and objectives were diverted from their main aim. With the radical groups, Syria has been dragged into a civil war, with violence based on the rapidly developing military background.

Since the beginning of the war, the movement which developed in Rojava Kurdistan has put distance between itself and the ruling both sides (the so-called opposition and anti-democratic regime) and defended the solution through dialogue and negotiations at every opportunity as the only solution, the guarantee of freedom, justice and human dignity, the rights of all peoples, that the basis of a democratic and free Syria which is possible with the direct governance of the people.
Rojava has tolerated this hostility with patience at all times and has avoided opening a second front against its neighbor in the north while still engaged in fighting terrorism. From the intensified attacks of the Turkish state towards Rojava in 2014 and until today, hundreds of people have been massacred, injured and the people of Rojava and its nature has been subjected to great material and moral damage to the people of Rojava and its nature.
The farmers who plough in their fields, collecting their harvests, the children whose playgrounds are close to the border have been targeted by Turkish soldiers and they continue to be targeted. As if this was not enough, the Turkish army attacked the headquarters of the YPG/YPJ, who are the only defense forces of the people of Rojava, and fulfilling this duty perfectly, in the Qerçox region on April 25, 2017. The Turkish army was not satisfied with targeting only the military headquarters, but also targeted the free media and destroyed the center of „Radyoya Dengê Rojava“ (Voice of Rojava Radio). In these air attacks, 20 people were martyred, including three press laborers.
Where and when did NoFlyZone4Rojava start?
On the morning of April 25, the people of Rojava flooded to Qereçox, where Turkish warplanes bombed. A Kurdish mother who saw the International Coalition delegation shouted at its commander and cried, „While our children are now fighting against Daesh (ISIS) shoulder-to-shoulder with you in Raqqa, how are you letting the Turkish state massacre us here.“ These words did not need translating. From the hatred in her eyes, the US commander understood the Kurdish mother and could not find an answer other than bowing his head in front of her.
As Rojavan activists and journalists, we have obtained our inspiration from the cries of this mother. „If we are fighting together, why are we being massacred by the Turkish Army, why is there no international protection for Rojava. Were we not the ones who defeated Daesh in Rojava and eliminated the danger that this terrorist group created for the world?“ We got our inspiration from these questions. On April 26, against the attacks of the Turkish state, we began to work with the uprisings which developed in all the towns of Rojava. We have demanded that the international community declare Rojava as a „no-fly zone“ to defend the lives and rights of migrants who have found refuge in Rojava, so that the struggle against Daesh is not weakened, and to defend the cause and values of the peoples of Rojava.
Although we were the ones who started and watched the campaign (#NoFlyZone4Rojava), the real owners were the people who filled the streets of Rojava and delivered the voice to the whole world in every field and social media.
(#NoFlyZone4Rojava) is bigger than all parties because it is the scream and call of the people. Because the campaign is only under the roof of the Rojava peoples. Every participant who supports the campaign is the main representative of the campaign’s official page, with the social media being the representative of this campaign. This campaign is not a court, but we only have one call: Every Kurdish, every Kurd, regardless of his or her position and opinion, should not give up on his/her family, Rojavan children, his parents, without giving up his duties and responsibilities but still stand up for their memories. Rojava needs everyone; support the (#NoFlyZone4Rojava) campaign.

Official accounts for the campaign are:
Facebook: https://www.facebook.com/RojavaNoFlyZone/
Twitter: https://twitter.com/RojavaNoFlyZone
Note:
1- We must be informed about every action to be developed for the campaign.
2- The Campaign’s Hashtag is (# NoFlyZone4Rojava) and there is no other hashtag.
3- Use the hashtag only in posts, not in comments.
4- Spread your friends‘ posts again after you’ve written the Hashtag.
5- Also use the hashtag in your Twitter and Instagram accounts.
6- Ask your friends to be active in spreading the hashtag.

When the Syrian people rose against the regime, the most basic demands were highly legitimate demands, such as freedom and respect for human rights. However, with the intervention of the regional and international powers to the Syrian revolution, these demands and objectives were diverted from their main aim. With the radical groups, Syria has been dragged into a civil war, with violence based on the rapidly developing military background.